In Senegal, the Jane Goodall Institute plans to recreate the chimpanzee natural habitat and reconcile the local populations with chimpanzees. This is a strong initiative which give us a glimpse of great projects for the Round Up operation initiatives for 2020!

As from 6 January 2020, 100% of micro-donations made via the Round Up operation initiative are contributed to the Jane Goodall Institute for its “Save the chimpanzee forest in Senegal” project.

Zoom on to the first Round Up operation project for 2020

As the last chimpanzee habitat in Senegal, the Dindéfélo commune forests are threatened by deforestation, caused by human activities (such as agriculture) and global warming, which cause droughts and floods.

When their natural habitat is threatened, chimpanzees migrate to villages in search of food, which creates conflicts with humans and in turn threatens the survival of their species even more.

To counter this phenomenon, the Jane Goodall Institute leads reforestation of chimpanzee natural habitat initiatives and works on economic alternatives to poaching for local populations. The association carries out most of this work with women, who bear the load of agricultural work in the community.

The funds collected through Round Up operation are used towards:

For more information, click on the Maisons du Monde Foundation project page or on the association website! 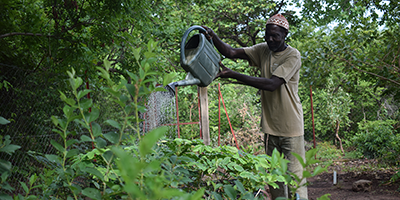